With no less than a dozen mid-century modern buildings (including casinos, listed separately ) in the downtown area, modernists will feel like they’ve hit the jackpot. All are within easy walking distance of each other and we’ve listed them from north to south (more or less)… click on addresses below for Google Map locations.

Old City Hall (400 Stewart Avenue ) – Currently the headquarters to online retail giant Zappos.com, this building’s modern design by architectural firm Daniel, Mann, Johnson & Mendenhall, was ahead of its time in 1973 and functioned as Las Vegas City Hall for nearly 40 years. A three story surround & skybridge were added in 2003.

Southern Nevada Telephone Co. (125 Las Vegas Blvd. South) – Occupying half a city block is this commanding example of mid-century modern design that boasts oversized angled fins and a giant geometric breezeblock screen that’s a work of art in itself. After its original occupant (the Nevada Telephone Co.) relocated, this 1957 building housed a few other communications carriers before sitting vacant.

Foley Federal Building (300 Las Vegas Blvd. South ) – Named for the family of the late federal judge, Roger D. Foley – who was also Attorney General of Nevada between 1959-1962 – the Foley Federal Building is a hybrid of International Style and brutalist architecture and was designed by prolific modernist architects Zick & Sharp in 1964. Bullet and bomb resistant materials were used in its construction.

Carson Building (302 E. Carson Avenue ) – Designed, yet again, by architects Zick & Sharp in 1965 for the First National Bank, The Carson Building was recently saved from the wrecking ball and underwent an extensive renovation. Check out its awesome wrap around breezeblock screen which extends to the adjoining parking garage, making the building appear to be twice as wide as it really is.

Meet Building (233 S. 4th Street ) – This former 1970s bank building is located at the corner of 4th Street & Bridger Avenue and has been stunningly restored and repurposed by MEET Las Vegas, a unique event and meeting venue.

Bridger Building (225 Bridger Avenue ) – This gorgeous mid-sixties International Style building was originally designed for the Bank of Nevada by Kent Attridge & Associates in 1964 and sits just down the block from where the equally magnificent 1959 Zick & Sharp international style Clark County Courthouse  used to be (it was demolished in 2014). Plans on what to do with the vacant Bridger Building are up in the air but let’s hope it doesn’t meet with the same fate as the Clark County Courthouse did.

Clark County Law Library (309 S. 3rd Street ) – A public library serving the legal needs of Las Vegas residents, this 1960s building is located right across 3rd Street from The Bridger Building and is another great example of the International Style made popular in the mid-twentieth century by Mies van der Rohe, Le Corbusier and Philip Johnson, among others. . 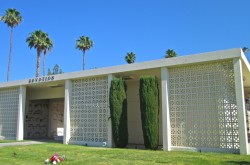 Mid-century modern buildings The Palm Mortuary & Cemetery dates back to the 1920s and has seven locations in southern Nevada. Read more… 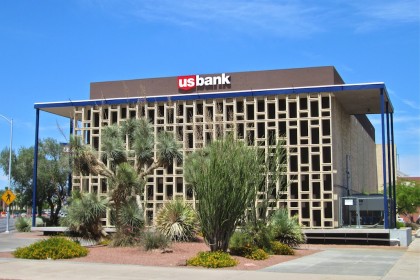 Mid-century bank buildings Bank design in the post-war years seemed to be about inspiring optimism and consumer confidence. Read more…