Built in 1959 by modernist architect Hugh E. Taylor, and originally located at the posh Desert Inn Country Club Estates (where The Wynn golf course is now located), the historic Morelli House was saved and relocated by The Junior League to its current downtown location in 2001.

Notable for being the home of Sands Hotel & Casino (rest in peace) band leader Antonio Morelli  and his wife Helen during the rat pack era, it wouldn’t be uncommon for performers like Frank Sinatra, Dean Martin, Sammy Davis Jr., and more to end up at the Morelli’s for after hours partying.

Architecturally, this modernist home makes great use of its horizontal lines, natural materials (exposed wood and stone), decorative concrete breezeblock screens (with atomic pattern!), and of course this being the desert, melding the indoors and the outdoors with clerestory windows and giant sliding walls of glass.

The Morelli House was added to the National Register of Historic Places in 2012.

It’s a real stunner and available for tours with advance bookings.

Bonus Building – If you’re a fan of art deco, right across the street from The Morelli House is the former Las Vegas High School, built in 1930 by George A. Ferris; a real deco delight. 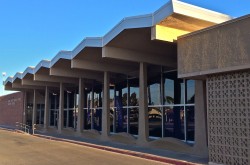 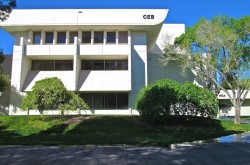 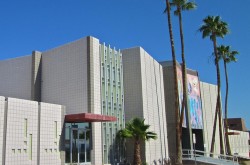