Following the completion of the Lions Gate Bridge by Monsarrat & Pratley in 1937 – which linked Vancouver to the North Shore – residential construction in the Capilano Highlands and surrounding environs began in earnest and continued through the 1950s and 60s when the area saw a boom in West Coast modern post & beam and ranch style homes.

Roughly bordered by Capilano Road, the Upper Levels Highway, Mosquito Creek and the base of Grouse Mountain, some of these vintage houses haven’t fared well over the years and have been bulldozed by overzealous investors, but there’s still a good concentration of beautiful houses in the area, many of which were designed by noted modernist architects such as Fred Hollingsworth, Ron Thom and Arthur Erickson, among others.

A stand out is The Trend House (4342 Skyline Drive) by Porter & Davidson, circa 1954, one of several prototypes built to demonstrate the versatility of British Columbia lumber as a resource to be used in the construction of modern housing. The Trend House program went national at the time and is now included on the Canadian Register of Historic Places.

A leisurely drive will reveal more gems while others will be shrouded by long driveways and landscaping. To help zero in on the neighborhood’s more architecturally significant homes you can check out an interactive map at The Modern Architecture of North Vancouver 1930-1965 by Donald Luxton and Associates … and as always, be respectful of homeowners’ privacy.

If you’re in the area, be sure to drop by Capilano Highhlands’ quaint commercial strip known as Edgemont Village where there are still many mid-century store fronts and businesses. Click here for their own interactive map. 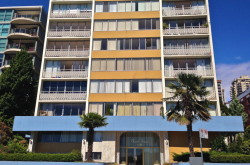 The West End, Vancouver, BC, Canada

Mid-century residential buildings Located southwest of downtown and bordered by the waterfront, Georgia Street, Burrard Street and Denman Street – although historically, everything “West of Denman” is also considered the West End… Read more… 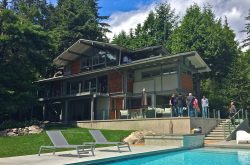 Mid-century modern tours There are a handful of decent modernism tours in Vancouver and a couple of great resources if you’d rather go the self-guided route. Read more…