Within a few blocks of each other in downtown Vancouver are a handful of nice mid-century structures originally built to house the Western headquarters for some of Canada’s national banks… just click on addresses below for their Google Map locations.

Bank of Canada Building (900 West Hastings Street ) – Designed by Thompson, Berwick & Pratt and built in 1965, this office tower sits atop a base (13-stories in total) which was meant to mimic the neoclassical style of the building across the street while maintaining its mid-century sensibilities. In fact, the precast concrete facade is almost brutalist in nature but its ornamentation contrasts with that notion. Don’t miss the building’s neoclassical nod on its west side.

Toronto Dominion Tower (700 West Georgia Street ) – Minimalist may be an understatement when describing this 30-story “black tower,” as it was referred to by locals upon completion in 1971. Designed by noted architect Cesar Pelli, this building strictly adheres to Mies van der Rohe‘s minimalist axiom and covers its steel frame with nothing but a darkly tinted glass curtain wall. Minimalist to the max!

Toronto Dominion Bank Building (499 Granville Street ) – Before there was a Toronto Dominion Tower there was the Toronto Dominion Bank Building; arguably the city’s first office building to exhibit modernist design sensibilities when it was built by influential architects McCarter & Nairne in 1949. Rectilinear in nature with fin shaped stepped awnings between each floor emphasizing a “futuristic” look, this 4-story gem is easy to miss as it lives in the shadows of neighboring towers and Rexall Drugstore retail signage. It’s worth seeking out, though.

Bank of Montreal Tower (595 Burrard Street ) – This 30-story tower, built as part of the city’s downtown Bentall Centre complex, went up in the early 1970s and boasts a beautiful glass-enclosed bank pavilion at its base. Try to look past the blue curved awning-like facade that was added later by BMO Financial Group and you’ll see a modernist jewel box of a building (located on the NW corner of Burrard & Dunsmuir Streets). Other mid-century financial towers within the Bentall Centre complex include the National Bank Tower and the TD Canada Trust Tower. For more on the Bentall Centre, click here.

Canadian Imperial Bank of Commerce Building (586 Granville Street ) – Designed by McCarter & Nairne in 1958, this former bank building is mostly made up of white vermont marble supported by black granite columns around its perimeter. The building’s ground floor frontage is now occupied by a Shoppers Drug Mart retailer but holds a remarkable mid-century mosaic mural – by artist BC Binning -which used to be on a featured wall in the bank. Click here for more details on the mural. Check out the building’s back alley side for a nicely recessed mid-century design etched into its concrete. 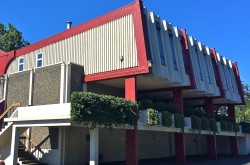 Mid-century modern buildings As construction boomed in the post-war years so too did the number of places to worship. Read more… 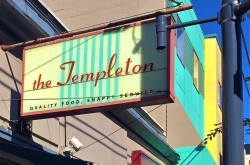 Vintage diners & restaurants Restaurants come and go, in foodie-centric Vancouver especially, which is why it’s nice to see a handful of mid-century joints still doing what they do best.… Read more… 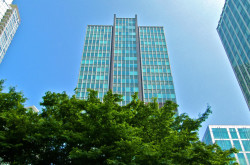