Vancouver Fire & Rescue currently has twenty-two Fire Halls serving the city, a handful of which were built (or, rebuilt) during the 1950s and 60s. Here’s a quick run down of these modest mid-century structures with corresponding photos… click on addresses below for Google Map locations.

Fire Hall No. 2 (199 Main Street ) – Clean, simple, compact and brutalist in nature, this structure went up in 1950 and is the busiest fire hall in Western Canada.

Fire Hall No. 9 (1805 Victoria Drive ) – With its alternating brick and concrete facade, Fire Hall No. 9 looks almost contemporary by today’s standards but was actually constructed in 1960.

Fire Hall No. 17 (7070 Knight Street ) – Although utilizing the same materials as Fire Hall No. 9, this 1954 building displays a much cleaner facade more reminiscent of the era in which it was built. A real beauty. Demolished in 2018

Fire Hall No. 20 (5402 Victoria Drive ) – This gorgeous 1962 single-story structure looks more like a mid-century modern designer office building, with its wall of windows and roof-front adornments, than it does a busy community fire hall. No surprise here, this one’s our favourite!

We’d be remiss if we didn’t also give a shout out to the brave men & women serving Vancouver who live & work within the walls of these vintage gems. Thank you for your service! 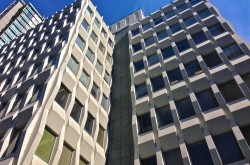 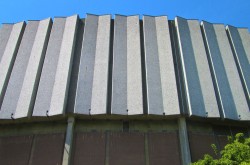 Mid-century/brutalist buildings Built in 1967 on the grounds of Exhibition Park – home to Hastings Racetrack, Playland and the Pacific National Exhibition – the Pacific Coliseum is an exercise in… Read more… 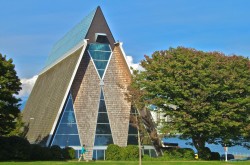