The Riviera Hotel opened in 1959 and was an instant hit, quickly attracting Hollywood’s elite and becoming the place to see and be seen during the swinging 1960s. The likes of Elvis Presley, Desi Arnaz and Sonny & Cher all stayed or performed at The Riviera.

After several years of decline, however, the iconic hotel was renovated and restored to its former glory in 2008, contributing to the mid-century resurgence we see in Palm Springs today.

The new Riviera Hotel has a cool Hollywood Regency feel yet acknowledges its past with retro lounges and restaurants, plus their large amoeba-shaped pool area is still second to none! A real treat for hipster modernists who want to live it up in style.

Located at the edge of North Palm Springs next to the Racquet Club Estates neighborhood. 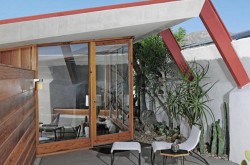 Mid-century/desert modern buildings Although not located in Palm Springs proper, we have to give a shout out to the Hotel Lautner; a mid-century modern enthusiast’s dream accommodation situated in the… Read more… 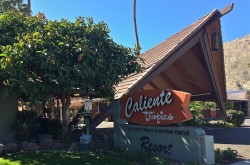 Tiki culture accommodations If Tiki Culture is your thing then the Caliente Tropics hotel is the place for you. Read more…