Located northeast of downtown Honolulu, the residential area of Makiki (not to be confused with Makiki Heights) surrounding the Makiki District Park was mostly built up during the late 1950s through the 1970s and is a treasure trove of mid-century tropical modernist low-rise, mid-rise and even high-rise residential buildings by some of Honolulu’s foremost architects.

Modernists could easily spend hours strolling around this densely populated neighborhood so to start you off we’ve included some of our favorite residential buildings within the vicinity of Makiki Street & Wilder Avenue (just a sampling, really) and we’ll continue to add more to the See Honolulu  page when we can.

Corresponding photos are above… click on addresses below for Google map locations… and as always, please be respectful of homeowners privacy.

Bel Aire Apartments (1543 Makiki Street) – This 6-story (including covered parking) mid-rise by Robert Matsushita is unique for its concrete accents including nice patterned block walls and lanai balustrades, circa 1964.

The Makikian (1190 Wilder Street) – Here’s a gorgeous 2-story walk-up from 1956 by architect Edwin Bauer. As the oldest building in this group it’s worth noting the many natural wood elements incorporated into it’s tropical modernist design.

Puna Kiki Apartments (1510 Dominis Street) – Comprised mostly of concrete blocks (some decorative), this simple 3-story building also features an overhanging flat roof and is representative of many other Makiki residential buildings from this period. By George Izata, 1961. 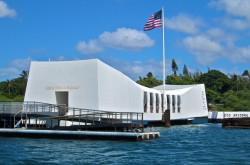 Mid-century modern structures The USS Arizona Memorial marks the final resting place for many of the 1,177 sailors killed aboard the battleship USS Arizona during the December 7, 1941, Japanese attack on Pearl… Read more… 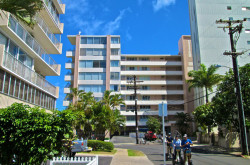 Mid-century modern buildings Near the end of Kalakaua Avenue, past Waikiki towards the base of Diamond Head, sits a strip of mid-century buildings on the Makai side (ocean side) of Kapiolani… Read more… 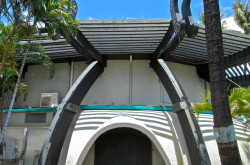 Mid-century restaurants Although the vast majority of Honolulu’s mid-century Polynesian-themed restaurants, drive-in diners and Tiki bars have long since been torn down, there are a handful of establishments still thriving… Read more…