Prolific architect Albert Frey lived and worked in Palm Springs for over 60 years, producing more than two-hundred home and building designs and pioneering what would later be termed “desert modernism.”

His first home (1210 N. Via Donna), built on the flat lands near the El Mirador Resort in 1940, was a sleek and simple exercise in minimalism and measured only 500 square feet (a 1950s extension was later added).

For his second home, Frey spent years searching for a challenging upland location and found it in the foothills of Mt. San Jacinto above Tahquitz Canyon Way. Perched high on the hillside, Frey House II finished construction in 1964 and was once again a minimalist’s dream, coming in at only 800 square feet.

Frey used high tech materials such as steel and corrugated aluminum juxtaposed with the hillside’s natural surroundings to create his own private, modern, desert oasis. He even incorporated a large boulder into the home and used it as a room divider! Oh, and there’s glass. Lots and lots of glass which reveals sweeping views of the Coachella Valley for as far as the eye can see.

Frey bequeathed Frey House II – where he lived until his passing in 1998 at the age of 95 – to the Palm Springs Art Museum. They routinely give tours of the property during Modernism Week and occasionally at other times of the year. Check their website for more information. The house is also visible if you’re hiking the nearby Museum Trail. 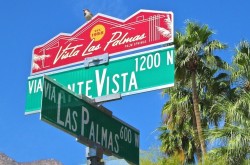 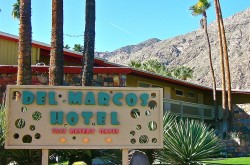 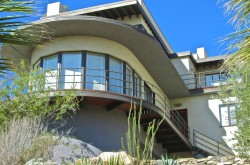 Ship of the Desert

Streamline moderne houses Resembling an ocean liner beached on the desert mountainside, the “ship of the desert” was designed by Erle Webster and Adrian Wilson in 1936 as a winter retreat… Read more…