The USS Arizona Memorial marks the final resting place for many of the 1,177 sailors killed aboard the battleship USS Arizona during the December 7, 1941, Japanese attack on Pearl Harbor.

The memorial structure itself, designed by modernist architect Alfred Preis and dedicated in 1962, is an exquisite 184-foot long bridge of sorts that seemingly floats above the submerged hull of the ship, from which visitors can look down upon it.

Its unique shape, which sags in the center and rises up on each end, represents “initial defeat and ultimate victory,” according to Preis who is quoted on the National Park Service website. “The overall effect is one of serenity. Overtones of sadness have been omitted to permit the individual to contemplate his own personal responses…his innermost feelings.”

Preis also designed a companion sculptural relief entitled “Tree of Life,” a symbol of renewal, which is on view at the WW II Valor in the Pacific Memorial grounds at Pearl Harbor. Its twin sculptural relief can also be seen in the shrine room of the memorial itself.

For a unique perspective, check out the original architectural drawings of the USS Arizona Memorial at ArizonaMemorial.org. 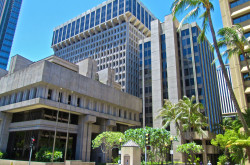 Financial Plaza of the Pacific

Mid-century brutalist buildings/plaza Comprised of three stunning Brutalist buildings and an inspired outdoor space, the Financial Plaza of the Pacific was originally conceived by Victor Gruen Associates in the mid 1960s… Read more… 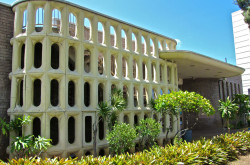 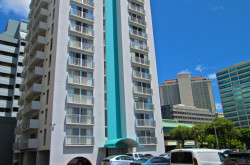