A good chunk of Honolulu’s modern infrastructure was built during the 1950s and 60s resulting in more modernist churches per capita than most American cities. These places of worship vary greatly in design but have one thing in common; they’re all mid-century amazing!

We’ve listed a bunch here (in no particular order) and elsewhere on the See Honolulu page. Corresponding photos can be viewed above… click on addresses below for Google Map locations.

Mystical Rose Oratory (3140 Waialae Avenue) – Located at the Chaminade University, this extraordinary space was designed by Brother James Roberts and Guy Rothwell, circa 1966 and boasts one of the most beautiful mid-century circular bifold roofs we’ve ever seen.

Our Redeemer Evangelical Lutheran (1404 University Avenue) – Designed in 1950 by Edwin Bauer and located not far from the University of Hawaii, this church and its accompanying school is classic low lying rectilinear 1950s architecture at its best.

Waiokeola Congregational Church (4705 Kilauea Avenue) – A tropical twist on the midcentury A-Frame by Paul Jones (Lemmon, Freeth, Haines & Jones), circa 1958, it incorporates lava rock and other indigenous elements into its modernist design.

Star of the Sea Catholic Church (4470 Aliikoa Street) – Merril, Simms & Roehrig integrate tropical modernism into the classic mid-century A-Frame with a broad overhanging roof and the use of regional materials, circa 1958.

First Southern Baptist Church (3121 Arizona Road) – Architect Ralph Buffington gives the mid-century A-Frame a real exaggerated and unique appearance here and it’s not to be missed. This church has been serving Oahu’s military personal and their families since its completion in 1960. Check out the original building drawings at Docomomo Hawaii.

Aiea United Methodist (99-101 Laulima Street) – Designed by noted modernist architect Vladimir Ossipoff, circa 1968, this church boasts natural materials such as lava rock and regional  timber and departs from the traditional into the realm of the abstract.

For additional modernist churches, click here. Please check back as we’ll continue to add more to the See Honolulu  page! 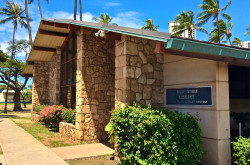 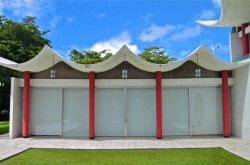 Mid-century buildings The Pali Highway, also known as Hawaii Route 61, connects communities like Kailua  and Kaneohe  from the windward side of Oahu to downtown Honolulu. Read more… 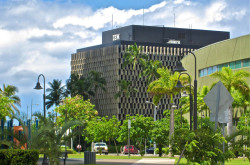