Designed by William Krisel (Palmer & Krisel) in the early 1960s for Robert & Helene Alexander of the influential Alexander Construction Co., this luxurious family home was uniquely comprised of 4 floating circular pavilions on three levels under one boomerang shaped roof.

State-of-the-art electronics, which would make The Jetson’s proud, were also installed to control indoor/outdoor lighting, temperature and irrigation.

Located in the Vista Las Palmas neighborhood, The House of Tomorrow was a trend setter at the time for modern living in Southern California.

Regrettably, in 1965, George & Mildred Alexander and their son Robert & his wife, were killed in a tragic plane crash which put an end to their mid-century modern building boom in Palm Springs.

For many years, the House of Tomorrow was better known as Elvis Presley’s Honeymoon Hideaway where he and Priscilla stayed for a short time after they married in 1968, but as of 2022 the iconic home was restored to its former glory and is once again a private residence. 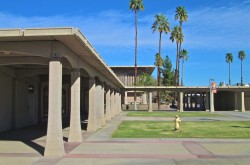 College of the Desert

Desert modernist buildings Located in the Coachella Valley‘s central community of Palm Desert, the College of the Desert is well worth the 30 minute (or less) drive from Palm Springs… Read more… 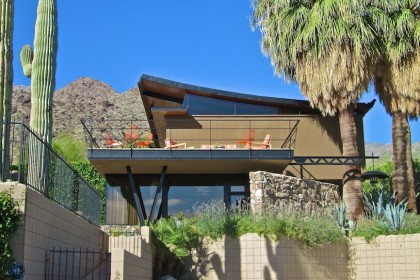 Mid-century/desert modern houses Located in the rocky northwest corner of Palm Springs, just south of Chino Canyon on the edge of the Little Tuscany neighborhood, sit half a dozen or… Read more… 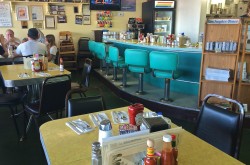